The legendary Weird Tales Magazine had a tough but reasonably long run, and it eventually achieved a cult status among the followers of fantasy/horror/SF genre. Several anthologies based on Weird Tales stories have been published by acclaimed editors like Peter Haining and Marvin Kaye. Here are two of my favourites:

Weird Tales: A Selection in Facsimile, of the Best from the World’s Most Famous Fantasy Magazine
Edited by Peter Haining

An anthology that is true to the spirit of the magazine. As the title says, this 250 page book is a facsimile reproduction of the actual pages of Weird Tales. Like the celebrated magazine’s original format, it has a two column layout and includes letters from readers, nostalgic illustrations, and priceless old advertisements that appeared in the late 1930s. If you never had the opportunity to grab an old copy of Weird Tales, this book will heal your wound. And Mr. Haining’s introduction is absolutely priceless. 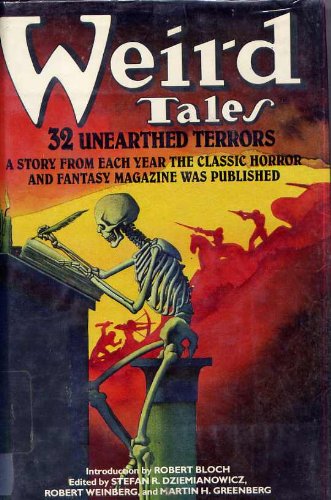 655 pages of some of the finest writing from the magazine’s finest years.  This is probably the biggest Weird Tales collection ever to hit the stands. It comes with introductions and illustrations for each story. Tentacled gods, haunted houses, laboratories illuminated with faint blue lights will scare you shitless.

If you ever get marooned on a desert island, this is one book you would want to have with you.

END_OF_DOCUMENT_TOKEN_TO_BE_REPLACED

With The Necromancers, Peter Haining ventures yet again into the murky world of witchcraft and black magic. This book is a sensational combination of fact, fiction, and folklore. The facts are dubious at best, some are just plain silly (Aleister Crowley’s piece being one example). However, that does not downgrade the entertainment quotient of The Necromancers — one of Haining’s best efforts.

This is the book that inspired Dennis Wheatley to come up with his essay “Satanism and Witches : Essays and Stories”.

Here are some of the outstanding stories that you’ll find in this collection:

Sax Rohmer – The Witch Finders: The author of Fu Manchu pursues witch finders across Europe. A non-fiction piece, as claimed by Haining.

Anonymous – The Black Goat of Brandenberg: Satanists hope to learn the secrets of Germany’s lost treasure and in the process, offer human sacrifice to Lucifer. What happens next in this tantalizing drama?

Robert Anthony (Anthony Rudd) – The Witch-Baiter: Mynheer van Ragevoort, who condemns witches, is abducted by the members of a secret society and exposed to unspeakable horror.

The Black Magic Omnibus, edited by Peter Haining, is an anthology of 29 stories, covering both fact and fiction. It attempts to interpret some famous black magic incidents and features people related to this dark practice. Haining’s selection is impressive, featuring acclaimed writers of the genre like Lovecraft and Shirley Jackson. A “must have” for horror fans, this out of print book is still available at ebay and Amazon in both single and double volume editions.