Charles Dickens wrote more than a dozen novels; if you love classics, you should read them all. But it’s a short life, so here’s our pick if you are running out of time:

This was Dickens’ personal favourite. David Copperfield is partly autobiographical and many incidents in the book echo those from the author’s own life. The title of the book has the same initials as that of its author (in reverse order though). David Copperfield is the story of a boy who fights against incredible odds and manages to turn his luck. This is arguably Dickens’ masterpiece; strong character development, brilliant imaginative quality and an emotional touch that can make you weep.

Dickens’ 13th novel is a compelling rags-to-riches story and is unusually slim compared to his other works. It’s a tale of a young orphan boy called Pip, who tries to get accepted into society by being rich and gaining status. Dickens poses a question to the readers: does the society accept immoral sources of wealth? In Great Expectations you come across a seasoned writer with a dark perspective. Check out the great film adaptation by David lean.

Bleak house can be read as a social commentary, a love story, and a detective novel. It is certainly not Dickens’ most popular novel, but is widely regarded as one of his most mature works. The highly complex plot, the curious use of both first person and third person narrative, the gripping melodrama works together to produce what Time magazine describes as Dickens’ “…grandest, most virtuosic achievement.”

A Tale of Two Cities

A timeless classic that delineates an intriguing drama set in Paris and London during French Revolution. A Tale of Two Cities is a love triangle and a historical novel that sold more than 200 million copies and became one of the most well known novels ever written. And yes, who could forget the remarkable opening paragraph: “It was the best of times, it was the worst of times…”

Dickens’ second novel and a grand successor to the popular classic — The Pickwick Papers. Oliver Twist is a gloomy book depicting endless villainies of Fagin, who uses orphan kids for criminal purposes. Dickens highlights social injustices in Victorian London through unforgettable characters. If you are new to Dickens, start with Oliver Twist. And don’t miss the Roman Polanski film based on the book.

What is your favorite Charles Dickens novel?

END_OF_DOCUMENT_TOKEN_TO_BE_REPLACED

Is there a soul who doesn’t recognize Mr Bumble (Oliver Twist), Mr Pickwick (The Pickwick Papers) and Mr Micawber (David Copperfield) — the iconic characters created by Charles Dickens? It’s simply delightful to see them on stamps. A fitting tribute to a great British novelist.

Dickens was 28 when stamps were introduced in England. This revolutionized the concept of letter writing in the country. Dickens would have been glad to see his characters are now a part of Royal Mail. 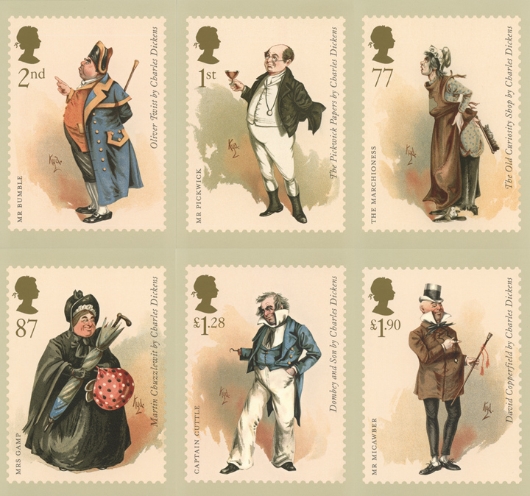