We love Penguin’s leather bound hardcovers. They basically cover good old classics. A lesser known but equally attractive offering is Gollancz’s Big Black Book series. There are just a few big black books in the series, but they offer some excellent compilations.

The Complete Chronicles of Conan by Robert E. Howard – Probably the only complete collection of original Conan stories. You are not a pulp fiction fan if you do not own this.

Necronomicon: The Best Weird Tales by HP Lovecraft – Unlike the Barnes and Noble edition, this is not a complete collection. However, in terms of presentation, it is vastly superior with excellent illustrations and a comprehensive afterword by Stephen Jones.

Eldritch Tales: A Miscellany of the Macabre by H.P. Lovecraft – Includes Lovecraft’s remaining major stories plus his weird poetry, nonfiction, and the critical essay Supernatural Horror in Literature.

The Complete Lyonesse (Lyonesse #1-3) by Jack Vance – An omnibus edition of Vance’s magnum opus. Like a goodreads review rightly mentioned “If Tolkien’s Lord of the Rings is the greatest fantasy epic of the 20th century, then Lyonesse is surely the greatest fairy tale.”

Tarzan of the Apes & Other Tales by Edgar Rice Burroughs – A selective collection but the best Tarzan stories feature here.

The achievement of Gollancz BIg Black Book series is essentially its atypical selection of works along with great presentation. We have plenty of publishers playing safe with Dickens and Austen. Glad to see some good folks betting on Lovecraft and Howard.
END_OF_DOCUMENT_TOKEN_TO_BE_REPLACED

END_OF_DOCUMENT_TOKEN_TO_BE_REPLACED Did the movie 10,000 BC give you distaste for the ancient world? If yes, you might want to check out Hadon of Ancient Opar — Philip José Farmer’s inspiring effort at heroic fantasy. It would certainly revive your curiosity for pre-historic civilizations.

Farmer’s story is an explicit homage to Edgar Rice Burroughs. He takes us 10,000 years back and shows what Tarzan’s Opar was in its heyday. Our hero Hadon goes to the city of Khokarsa to win the Great Games, leads a perilous expedition to the Mediterranean and faces a coup d’état when he comes back. This is where the story takes off with a bloody war.

Hadon of Ancient Opar is the second volume of Khokarsa series (the first volume is Time’s Last Gift). It is a pretty cool story and Farmer doesn’t make a mess of ERB standards. However, the fight scenes are more graphic and you encounter loads of sex.

This book has a sequel too called Flight to Opar. Check that out, if you like this one.
END_OF_DOCUMENT_TOKEN_TO_BE_REPLACED 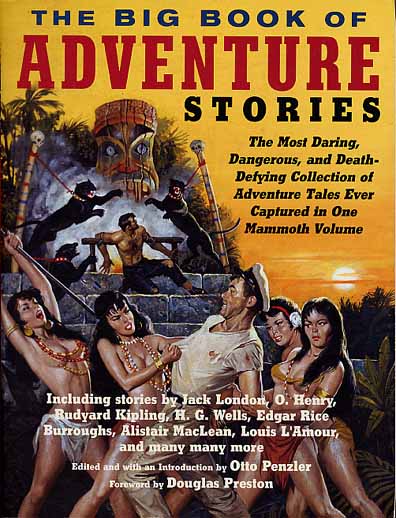 If you have a taste for pulp fiction, then you can’t get a better deal.  This 900 page book has stories from the masters of the genre as well as from writers like H. C. McNeile who are not familiar names to the average Joe. The stories are neatly categorized under different sections like “Island Paradise”, “Sand and Sun”, “Future Shock”, “In Darkest Africa”, etc. This book is stuffed with adventure, escapism, romance, seductive blondes, mystery, fantastic voyages, combat, conspiracy, and exotic places. Once again you are with daring heroes like Tarzan, Cisco kid, and Conan and a sense of peril fills you.

Apart from famous adventure tales like Richard Connell’s The Most Dangerous Game and Robert E. Howard’s The Devil in Iron and some rare gems such as P.F Nolan’s Armageddon – 24519 A.D., you’ll find a complete Tarzan novel (Tarzan the Terrible) in this book.

Most of the stories are from early 20th century — the golden age of classic pulp. Penzler says in the introduction that it would be wrong to judge the stories with a modern perspective. These classics are neither realistic nor liberal in terms of gender and race. Ironically, 46 out of the 47 stories are written by men. Does Penzler himself show gender bias? Doesn’t it sound unbelievable that the editor has named a section as “Yellow Peril”? And racial discrimination is not restricted to this section alone. In “Armageddon 2419 A.D” (Future Shock section) Philip Francis Nowlan states that the U.S will “blast the Yellow Blight (China)” one day.    (Mention section)

People have forgotten H.G Well’s serious fiction. But his scientific romances like War of the Worlds and The Time Machine are still widely read. No one remembers Conan Doyle’s historical fiction. But the popularity of his Sherlock Holmes stories shows no sign of waning. The Big Book of Adventure is true pulp and chances are that we won’t forget it easily. This book also gives you a reason to read the works of writers like Robert E. Howard and Philip Jose Farmer once again. Not a bad thing, huh?

You should be aware of the fact that a few stories like To Serve by Damon knight, though pretty good, cannot be called adventure.  Purists may also argue that classic tales like The Fantastic Voyage and The Gaslight Romance are missing. Finally, some of the stories are quite average (As is the case with almost all anthologies). Nonetheless, these flaws cannot hide the fact that this book is our passport to a lost world of high adventure, which is so alien to us now. The Big Book of Adventure Stories offers you an opportunity to return to your childhood once again. Honestly, nostalgia was never more fun. You got to thank Mr. Penzler for that. END_OF_DOCUMENT_TOKEN_TO_BE_REPLACED